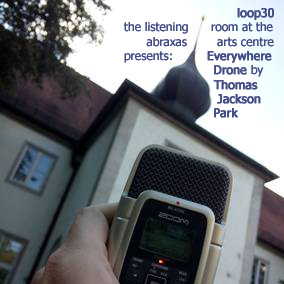 Thomas Jackson Park: Everywhere Drone
(exhibited at loop 30 – the listening room at the abraxas arts centre, Augsburg, Germany, November 2016)
About this release:
In light of the transatlantic history of the building (which was used by the U.S. Army before it became a community arts centre in 1995), loop30 – the listening room at the abraxas arts centre, is happy to present its first exhibition of sound art works by an artist from the U.S. With his musical projects Mystified and Mister Vapor, as well as his label Treetrunk Records, Thomas Jackson Park from St. Louis, Missouri, has been a prolific presence on the international experimental music scene for many years. Completing the transatlantic feedback loop is the fact that Treetrunk Records has released, and will continue to release, all original sound work created for loop30 as free download albums.
A common denominator of much of Park’s work is the exploration of ‘drone’ structures. The term drone means a static, unchanging tone that persists throughout the duration of a whole piece of music. Drone tones are a characteristic of classical Indian music, for example, but can also be found in some traditional musics of Europe (bagpipes typically play drones) and also pre-modern European art music.
In recent decades, new forms of ‘drone music’ have emerged across a variety of electronic and even rock-based musical idioms, from ‘drone ambient’ to ‘drone metal’. What they share is an interest in very slow musical developments, sometimes bordering on stasis. Listening to such sounds is very different from much of our musical experience, where variety and tempo are what we usually listen out for. But drone sounds not only challenge our listening habits, they also go towards de-programming our everyday modes of behaviour, which are usually geared towards speedily, efficiently working through our everyday chores both at work and in our private lives. In fact, sociologists such as Hartmut Rosa have argued that the continuous acceleration of modern life since the beginning of industrialisation is now reaching, or has already reached, a point where human beings tend not to be able to cope with it anymore.
Drones offer a possible antidote to this development. They invite us to listen closely to very slow developments, offering us time out from the constant rhythm of ‘speed and efficiency,’ giving us a sonic canvas on which to develop our own creative ideas. As they undermine the distinction between space and time, with sounds becoming so static that they acquire the quality of a sculpture one can walk around in and ‘inhabit,’ they have become a particularly important feature of sound art in gallery, rather than performance, contexts, such as loop30.
Digital sound processing is much more suitable for creating long-duration sustained drones than most traditional musical instruments (and their players, because holding a tone for a very long time on a traditional wind or string instrument can be an extreme physical challenge). Perhaps more often than not, contemporary drone works are created from extra-musical source material. Here again, as in the case of ‘stasis vs. acceleration,’ the introduction of an ‘artificial’ drone into our everyday acoustic environment can make us aware of the fact that most of time we are already surrounded by drones, such as the groundswell of traffic noises that is present in practically every urban settlement around the globe.
Everywhere Drone is a case in point as it is largely composed of incidental industrial/atmospheric sounds that have been mixed with synthetic sounds and processed.
Still Constant is a remix of Thomas Jackson Park’s piece Constant, which was designed to create as minimal a persisting sound as could be listened to. Still Constant adds texture to the original piece.
Level Three is an early piece that marks the transition from noise music to drone music in Park’s career. It is based on the sounds of shortwave radio, which have been processed to give them a resonance that brings out rather smooth continuous sounds underneath the unquiet surface.
Everywhere Drone 29:59
Still Constant 20:10
Level Three 5:19
Thomas Jackson Park: http://www.mystifiedmusic.com/
Treetrunk Records: https://treetrunkrecords.wordpress.com/
About the loop30 series on Treetrunk Records:
‘loop30 – the listening room at the abraxas arts centre’ is indebted to the ‘acoustic turn’ towards the practice of hearing/listening. Opened in November 2015, this audio gallery brings the sound of varying audio works to the foyer of the community arts centre in Augsburg, Germany. The offer that ‘loop30’ makes to its visitors is fundamentally different from the muzak forced on visitors of far too many public spaces. ‘loop30’ presents subtle sounds that operate in an intermediate zone between everyday sound and artistically crafted sound. Thus the foyer, itself an intermediate zone through which people move into various other parts of the building such as a visual arts gallery or restaurant, is an ideal space for presenting such work. The installations in the foyer can stimulate the passing visitor as well as offer surprising discoveries to those who take the time to listen more closely. After the exhibitions, the installation soundtracks are made available online on Treetrunk Records.